The 10 year anniversary of “Flicker” (2005), my second release hit this past fall 2015 and I find myself growing more and more nostalgic and increasingly aware of the passing of time. I’ve been very lucky to do what I do. I’ve been luckier to have found an audience in you guys that interprets what I do and connects with it enough to continue supporting me. I like to think I’ve grown wiser with time, but as I look back on “Flicker”, all the themes covered in those songs, and my scribblings in my notebooks that eventually become lyrics, I notice that not much has changed. I still scribble in notebooks, I’m still that frightened and insecure person at times. I’m still saddened for humanity, while simultaneously aware of my own guilt for my own apathetic contribution to society. I’m still struggling with the same issues and thoughts I had 10 years ago. The sharpness of some of the painful themes has numbed a bit with time. I even captured this realization in a lyric on my last release “Plastic Makes Perfect” when in the song “3 months” I sang “It gets easier than this I swear, you just can’t see it from there” almost a as a message to a younger self. (PS. “3 months”  was a theory that my younger self came up with, that it takes 3 months to get over anything painful in life if you can just wait it out, you’ll feel normal again.. my current self has since realized how wrong that was? 😉  But I digress as this is not a song dissection about that song.

I found it hard going back to choose a song to dissect from “Flicker”, made even harder since sadly, I’m lacking most of my old files from that time period. I’ve been through a few computers since then, and have had one hard disc crash since then.  I was able to find a few items, but disappointingly, there just isn’t enough to do my complete dissections like I did when I started the whole dissection concept for “Hearts For Bullets”. So, I’m planning to dissect three tracks from Flicker, my thoughts, and memories, the process and anything that I can remember. After that, I’m ready to move on to dissecting the new material.

The writing process for Flicker

The year had just turned 2004, the only social media I had was my Kittenflug Live Journal, which I just reviewed. Funny! I used to write more when posts could be long! I guess I’m wordy 🙂  mySpace was just getting started if you can believe it. Ayria was only one year old, with the  “Debris” release that came out Fall 2003. I was coming off my very first tour of the USA supporting Razed In Black and Glis. I was just a baby it seems!  I was motivated and inspired about everything. I had learned a lot from the work on “Debris”, I could already write songs, but I realized, if I wanted Ayria to continue on my own terms, I’d have to become more self sufficient at programming and music. I had a lot of ideas, I had so many songs in my head, and I really wanted my next release to express even more of me. 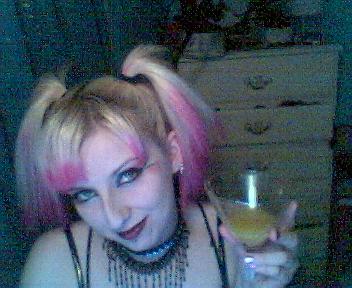 One of my closest friends in Toronto (Joe Byer of the band v01d, who also helped produce Flicker – go check out his music it’s amazing and I sing on his track “Weakener”) he helped me get my own home studio setup and taught me the basics of how to use Cubase and Reason. I got a bunch of soft synths, some cool instrument packs, and I bought my first synth, a Nord Lead 2 off ebay. I already had my guitar that I used for writing songs (such as “Disease” years earlier), so I was all good and ready to go!

Before I write about a few songs specifically, to sum up this release, I’ve always felt that “Flicker” was my experimental and indulgent album. I was exploring a new creative outlet having learned to program meant I was free to play with loops, and instruments and samples all day long, and structure songs however I wanted. It was fun!! Most songs on Flicker ended up being around 6 minutes long, which made some of them hard to play live, especially when I’d perform as the opening act when I’d get short 30 minute sets, it meant I could only play 5 songs in total!  The next release “Hearts For Bullets” I really tightened the song writing approach as I grew as a song writer. But I’ll forever hold the songs on Flicker dear to my heart and so important in my progression with Ayria. The songs still stand out to me, I still love them all even if I rarely listen to them anymore.  They are darker than I even remembered when I listened through it all recently.  I can’t wait to break some more of these songs back out on my 2016 headlining tours again!  (If you’re reading this far, and you didn’t already know: the UK leg of the “Paper Dolls” tour will be in June 2016, and the US leg in October 2016. We will book any other interested markets too of course).. back to the process of creating music..

The first song I wrote, on my guitar, was “Disease”, but the first song I programmed ever all on my own was “Cutting” It’s a minimal 80’s influenced track, sounding a bit like old New Order. It’s simplistic and full of arpeggiated synths (I had just learned how to do that with Reason after all! They were all over that song 😉  a bit of a strange beat underlying this track, that breaks into a militaristic bridge with a hypnotic layered vocal chant… and I’ll admit, this song overall is perhaps a bit repetitive, but I was hooked with the verse/chorus and thought it hooked enough with the change to the chorus, and besides, I didn’t care, I went for it and I still believe it’s completely addictive.

Here’s a bunch of isolated stems of the song instrument layers.

I also remember bringing this newly finished track on CD to my local club here in Toronto called Savage Garden.  I came early when the club was empty, and they let me blast it on the system to check out how it sounded. The most exciting feeling ever is when you get to hear your music loud and in the environment it really shines.. in da club! ;P It also gave me this confidence that, yes, this was going to be good. I’m doing it! This is happening!

It’s probably no mystery. This song came from my own personal experience, but from what feels like another lifetime ago. When I was in high school, I occasionally got so angry and felt so overwhelmed and helpless. I felt I had no outlet for these extreme emotions that I would occasionally hurt myself.  Some lyrics: “dispersing what I feel, so I feel nothing”.  I look back at this song sometimes and can’t believe I wrote such a straightforward honest, outward, song about every personal emotion about self harming. There is nothing to hide behind in this song, but what made it all worthwhile, was the outpouring from some of you guys after it came out. I can’t believe how many people wrote me to express that this song saved them in some way, or they (sadly) identify with it all too well. I know so many teens and adults do this/have done this, and struggle with angst and depression, but if this song helped you in any way, it made putting my weaknesses out on display, feeling exposed and vulnerable, totally worth it all. I look back even further to high school now, and it feels so very distant. It doesn’t even seem like me.  It really was a long time ago for me 😉 but I’m also so far from that stuff emotionally now. I still remember the emotions, and I still have one tiny scar on my left arm. My tiny reminder. We all grow, we all struggle, we all look back, we all regret, we all (hopefully) move on and get stronger and wiser.  It does get easier than this, I swear… You just can’t see it from there 🙂

Since I don’t have many cool artifacts to share about the writing of this song. Here’s me in highschool going through what highschool people go through.. OMG that hair! My natural colour! Shocking.. If I thought I was a baby in 2004, check this out! ;P 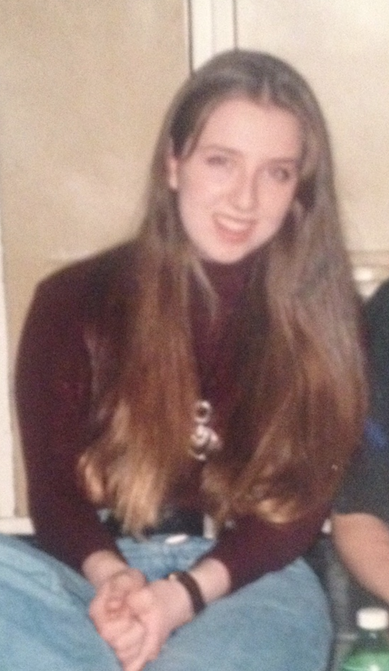 (Me rocking my guitar at a friend’s party in my first “band” where I covered songs by Nine Inch Nails, Marilyn Manson, Nirvana, Hole, Rage Against the Machine, L7.. etc..) 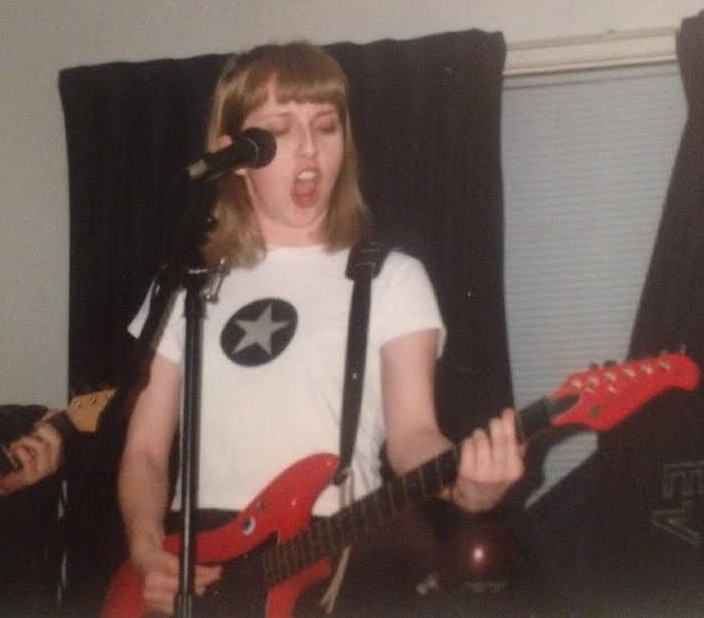 My favourite lyrics from this track:

“I don’t know what to do to be as numb as you. I must be doing something wrong to always feel this down with an overwhelming urge to shut out those around”

“I try to reach out to my past, but the lesson learned was to not look back. The memories will just confuse, an overwhelmed and frightened youth”

This song is also really fun to sing with that beat… the full lyrics are below. They were also printed in the booklet.  I stopped printing lyrics in 2013 on Plastic Makes Perfect, when it was easy to find them online, and I wanted to maximize the photos, art & design.

I loved doing this song live.  For those of you who caught Ayria live around the 2007-2008 Cruxshadows US tour era, I used to sneak in the lyrics of “Milkshake” into this song, which, combined with the theme of this song, is probably HUGELY inappropriate, but that’s what I do.. I’ve always put fairly energetic music to the most depressing lyrics ever, so the contrast of my being ridiculous somehow seemed to work 🙂 I also used to do an edited version of this live, since the original track was very long for a live show.

I know you’re all internet ninjas and can hear and own the full song for free, but as the artist behind it, who works hard at both a full time “regular” job, and music in every spare moment I can find, if you enjoy what I do, please consider supporting me directly at the following outlets: Bandcamp, iTunes, physical CDs from my shop with a beautifully designed booklet that I will personally sign to you.

Next 2 songs I’m planning on dissecting from Flicker: Lovely Day & My Revenge On The World.